Why am I writing about a treatment for horses in a genealogy blog? 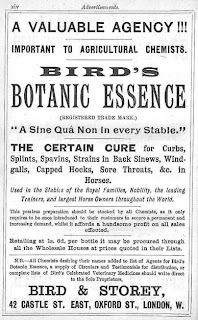 This advertisment was found in a book given to me by my great uncle, Aubrey Cuthbert Reader. The book, titled Veterinary Counter Practice, was published in 1891. Aub Reader was a chemist at McKinnon in Melbourne, as was his father, Felix Maximillian Franz Reader who lived in Dimboola then Warracknabeal in Victoria. This book originally belonged to Felix. The book was written for chemists, providing advice on dispensing treatments for animal diseases. In the foreword, it is emphasised that it is not intended that chemists compete with veterinary surgeons.

No doubt chemists in more remote regions of Australia diagnosed illnesses as well as dispensing treatments for both animals and people - But perhaps Felix took this a bit too far!

The Melbourne Argus of 14 June 1901 reported on the outcome of an inquiry into the cause of death of a woman named Flora Burns as follows:

"The jury, after an hour's retirement, brought in a verdict to the effect that the deceased had died of blood poisoning, as the result of an illegal operation performed by F. M. Reader. Reader was committed for trial at the Supreme Court, Horsham, on the 10th September."

The prosecutor, however, decided not to proceed with the case, and Felix continued his work as a chemist.
Posted by Allen Evans at 11:14 AM